Grandson of the 27th president William Howard Taft, Senator Robert Taft's had a distinguished career of his own in the United States Senate. 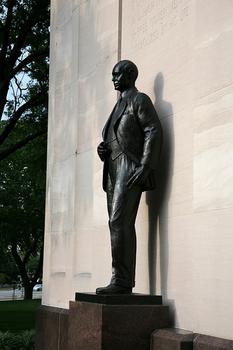 Grandson of the 27th president William Howard Taft, Senator Robert Taft's had a distinguished career of his own in the United States Senate. At the memorial his figure stands in front of an enormous carillon tower with 27 bells. The bells ring every quarter-hour, although the best time to visit is undoubtedly the Fourth of July, when the bells ring to the tune of the Star Spangled Banner at 2PM.

Robert Taft Memorial and Nearby Sights on Map

The Smithsonian's own philatelist Shangri-La has one of the world's largest collections of rare stamps, as well as exhibitions of how mail has been delivered throughout history, and other ways that the mail shapes culture

Located in the Pension Building, the building itself is highly recommended for its architecture, with an expansive open interior space with massive columns