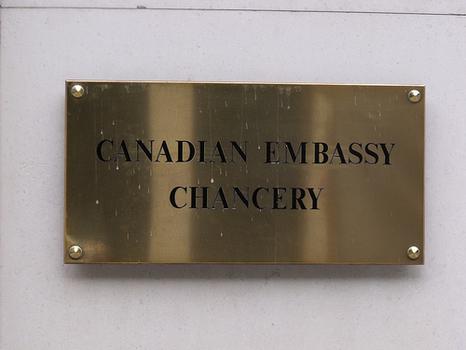 The U.S.' biggest trading partner, and the nation closest to the United States in nearly all senses has the embassy closest to the U.S. government, right on Pennsylvania Ave. The building is a striking, contemporary masterpiece, helping Vancouverite architect Arthur Erickson win some prestigious awards. Look for the small dome and columns incorporated into the exterior (in part designed as a gentle mockery of the neoclassical imperial style prevalent around the Capitol), which serves as an echo chamber of sorts, where you'll have any sounds directed right back at you from the dome.

Canadian Embassy and Nearby Sights on Map

The National Law Enforcement Officers Memorial honors the federal, state, and local policemen who have lost their lives in the line of duty

Koshland is very much on the small side for D

Located in the Pension Building, the building itself is highly recommended for its architecture, with an expansive open interior space with massive columns