The newest of the Smithsonian museums displays the cultural traditions of the Native peoples of North, Central, and South America. 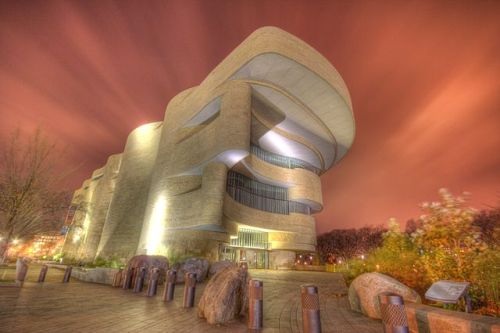 The newest of the Smithsonian museums displays the cultural traditions of the Native peoples of North, Central, and South America. It focuses on twentieth century and present day culture much more than pre-Columbian and colonial periods. The exhibits can be fascinating, but are not as grandiose as those of the other museums. Perhaps the most important attraction is the gorgeous building itself, designed by famous Native Canadian architect Douglas Cardinal of Blackfoot descent, echoing the ancient stone formations of the American Southwest, and surrounded by manifestations both metaphorical and literal of natural North American landscapes.

About National Museum of the American Indian

National Museum of the American Indian and Nearby Sights on Map