Home to D.C.'s premier collection of international modern and contemporary art, housed in an intimidating brutalist spaceship of a building. 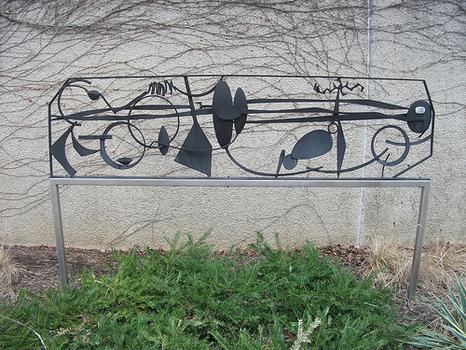 Home to D.C.'s premier collection of international modern and contemporary art, housed in an intimidating brutalist spaceship of a building. The exhibits are wonderfully stimulating and cutting-edge, albeit often not made accessible to casual viewers (a free docent-led tour available noon-4PM can be helpful), and very often not family-friendly with very graphic content. The museum tries to make it clear when you are about to walk into an 'adult exhibit,' but do not count on this if you are with children. The sculpture gardens, however, are great fun for kids, and a nice quiet escape from the Mall proper. And this modern sculpture collection of several Rodins, a huge Lichtenstein brushstroke, and other famous works, is world-class!

Hirshhorn Museum & Sculpture Garden and Nearby Sights on Map