The Saranrom Park offers shade and relaxation in the midst of greenery and fountains. 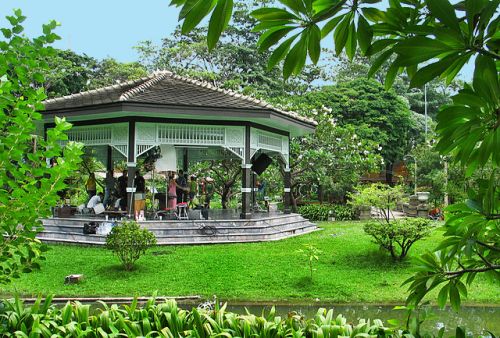 The Saranrom Park offers shade and relaxation in the midst of greenery and fountains. Tired travelers visiting the nearby Grand Palace and Wat Pho come here to rest their feet. Wat Ratchapradit and Wat Ratchabopit are also in the vicinity.

Originally a part of the Saranrom Palace, it was built in 1866 by King Rama IV for use after his abdication, but he died before it was completed. His successor King Rama V gave the palace to his younger brothers, and turned the park into a zoo. When he built the Dusit Palace in the early 20th century, he moved all the animals to the Dusit Zoo. The park then became a property of the Ministry of Foreign Affairs, and turned into a public park in 1960.

The basic layout still resembles the original design of 1866. It is a lush garden created around a lake, home to glasshouses, ancient trees, ponds with fish, and wooden pagodas. At the south end of the park is a marble monument dedicated to HM Queen Sunantha Kumareerat and HRH Prince Kannaporn Phetcharat, who died in a boating accident during the reign of King Rama V. It is a regular haunt for locals looking for jogging and aerobics. There are weight lifting equipment and table tennis facilities as well.

Saranrom Park and Nearby Sights on Map