Both a museum and a memorial, this space is dedicated to the exposition of just what exactly occurred during the Holocaust, its pointless inhumanity and unbelievable suffering. 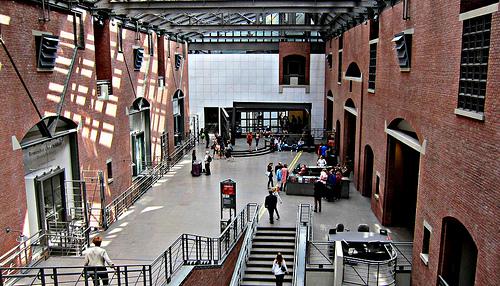 Both a museum and a memorial, this space is dedicated to the exposition of just what exactly occurred during the Holocaust, its pointless inhumanity and unbelievable suffering. Exhibits include video and audio testimonies as well as more traditional museum exhibits. This is without a doubt the most somber, and even disturbing place for visitors on the Mall, and a good portion of the visitors leave sobbing, make sure your kids are old enough for this material. Entrance is by free timed ticket on a first come, first served basis during the busy months of March-August.

United States Holocaust Memorial Museum and Nearby Sights on Map

Located in the basement level of the Department of Commerce building, the National Aquarium is much smaller than the one in Baltimore

Thomas Jefferson played an outsized role as one of the USA's Founding Fathers, the principal author of the Declaration of Independence, and the third president