The World War II Memorial in the National Mall commemorates the 16 million servicemen of the US armed forces who supported the country's World War II efforts. 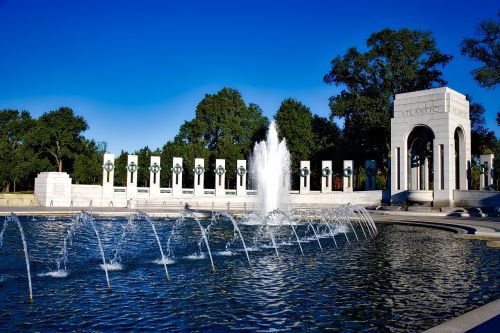 The World War II Memorial in the National Mall commemorates the 16 million servicemen of the US armed forces who supported the country's World War II efforts. 405,399 Americans died, and the memorial serves as a somber reminder of the massive loss of human life due to war.

Two American flags on flagpoles mark the entrance, which is flanked by 24 bronze panels with bas-reliefs recounting the story of America's experience in the war. 12 panels are dedicated to the European Theater of Operations, while the rest depict the Pacific Theater of Operations. The memorial consists of fifty-six 17 feet tall granite pillars connected by a bronze sculpted rope arranged in a semicircle around a plaza, representing each US state and territory at the time of the war - 48 U.S. states of 1945, the District of Columbia, the Alaska Territory and Territory of Hawaii, the Commonwealth of the Philippines, Puerto Rico, Guam, American Samoa, and the U.S. Virgin Islands. Two 43 feet high triumphal arches, the Pacific and Atlantic baldacchinos, lie on opposite sides, each with 4 eagles carrying laurel wreaths. The Freedom Wall to the west is a Field of Gold Stars, with 4048 gold stars representing those who died in the war. The complex has 2 'Kilroy was here' engravings, a reference to the famous meme from that era. The memorial also incorporates the water and fountains of the Rainbow Pool which formerly occupied the site.

World War II Memorial and Nearby Sights on Map

This is the oldest art gallery in the American capital, housed in a beautiful, large Beaux-Arts building

Located in the Constitution Gardens of the National Mall in Washington DC, the Vietnam Veterans Memorial honors members of the U

The Ringgold-Carroll House was built in 1825 for Tench Ringgold, who was part of a three-member team in charge of restoring public buildings in the District of Columbia, following the War of 1812