A Hindu temple dedicated to Lord Krishna, an incarnation of Vishnu. 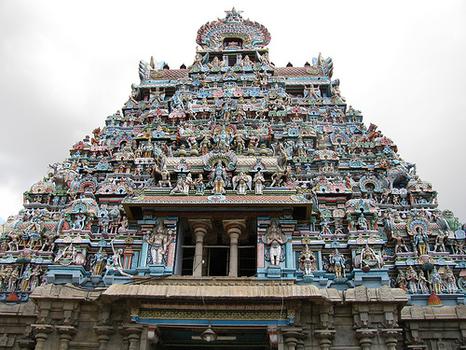 A Hindu temple dedicated to Lord Krishna, an incarnation of Vishnu. Right next door to Kwan Im Thong Hood Cho, and there's a steady stream of Chinese visitors hedging their bets by making offerings to the Hindu gods too.

Sri Krishnan Temple and Nearby Sights on Map

Dedicated to Kuan Yin, the Goddess of Mercy

The largest oceanarium in the world

Modern art from both Singapore and the region

The largest dedicated photo gallery in South-East Asia, with a focus on Singaporean talent

Built to house the 50,000-piece toy collection of local enthusiast Chang Yang Fa, the contents of this five-story building covers come from 25 countries and span over a century of 'Moments of Imagination and Nostalgia with Toys' (hence MINT), with everything from wind-up toys to Darth Vader masks

Little India's busiest and oldest temple, dating back to 1881 — although the present structure was completed in 1986

Also known as Masjid Sultan and the largest mosque in Singapore, the building is easily identified thanks to its golden domes, but there's not much to see inside

Set on the grounds of beautifully restored Istana Kampong Glam, the site looks gorgeous from the outside but despite some half-hearted attempts at whiz-bang multimedia, the museum inside is rather disappointing

Formerly a branch of the ACM, now reborn as a standalone museum dedicated to the exuberantly colourful culture of the Peranakans, the Malay-Chinese and Malay-Indian traders who had a major impact on the Straits Settlements