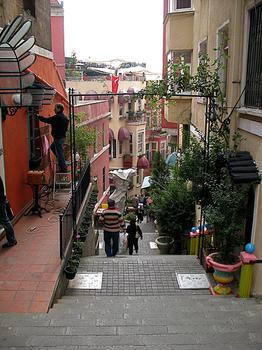 Better known as Fransız Sokağı or La Rue Française, i.e. 'French Street', is an alley of statues and geraniums hanging from windows, featuring France-themed restaurants, cafes, and pubs housed in renovated and brightly-painted neo-classical buildings. Upon its inauguration in its present form in 2005, there was a brief debate on how political correct it is to rename the street from Cezayir (Algeria) to Fransız, who fought a bitter war against Algerian independence in 1960s, which led the city council to abandon the idea of officially renaming the street.

Cezayir Street and Nearby Sights on Map

This is a park occupying two sides of a valley of this hilly city, with an avenue in between

Maiden's Tower, also called Leander's Tower, is built on a small islet surrounded by waters of Bosphorus off the Üsküdar coast where you can have breakfast before noon (a standard breakfast costs 35 TL pp), have drinks during day or dine (mid-expensive) inside the tower itself

Among the exhibition of this museum are five thousand pieces from the Ottoman era through the WWII, with the most prominent piece possibly being the huge chain that the Byzantines stretched across the mouth of the Golden Horn to keep out the Sultan's navy in 1453 during the siege of Constantinople

Finding a quite large and still operating church on the edge of the main square of the largest city of a predominantly Muslim country may not be expected by everyone, but this is exactly the definition of the quite elaborate Hagia Triada

A dancing hall of the mystical Mevlevi order, shut down in 1925 along with all other 'reactionary' movements in Turkey

The historical 3-storey house, easily recognizable among concrete apartment buildings with its pink exterior, which the founder of Turkish Republic, Kemal Atatürk rented while staying in Istanbul before setting sail to Samsun on Black Sea coast to start the Turkish War of Independence