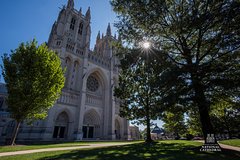 As the sixth-largest Cathedral in the World, Washington National Cathedral serves... ...t! With the Old Town Trolley, visit the National Cathedral, Smithsonian museums and more. And, the DC Ducks let you expe... 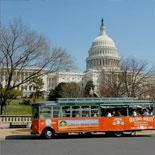 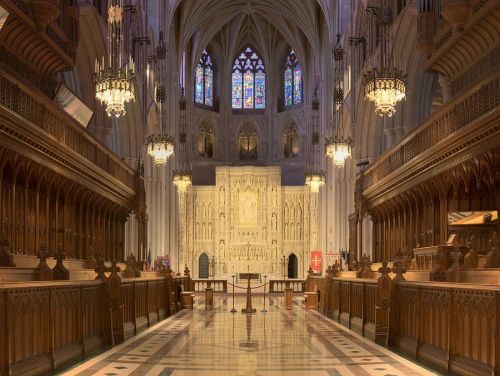 The Cathedral Church of Saint Peter and Saint Paul in the City and Diocese of Washington, better known as the National Cathedral, is the seat of the Bishop of the Episcopal Church and the Bishop of the Diocese of Washington. The imposing Neo-Gothic structure on Mount Saint Alban is the 6th largest cathedral in the world, with its Gloria in Excelsis Tower over the crossing soaring 91 metres above the ground.

Built from 1907 to 1990, the stunning cathedral constructed from buff Indiana limestone is noted for its architecture and works of art. There are several flying buttresses as well as interesting gargoyles over the façade, including Darth Vader, 'yuppie' that represents a New York executive, American rattlesnake, master carver, and a bear representing the state symbol of Missouri. The west façade is flanked by towers, which have the Pilgrim Observation Gallery that offers panoramic views of Washington DC. It features the iconic 'Creation' rose window by Rowan LeCompte and Dieter Goldkuhle, made from over 10,000 pieces of colored glass which depict the Creation of Light. Below, the tympanum of the central portal features the Ex Nihilo relief depicting the creation of mankind from void. The side doors in the towers feature Saint Peter and Saint Paul, with the tympanums illustrating the Creation of Day, and the Creation of Night. The south façade has the Last Judgement rose window, as well as the Pilgrim Steps that lead to the portal. Its highlight is the Space Window which contains a 7.18 gram basalt lunar rock from the Sea of Tranquility donated to the Cathedral by the crew of Apollo 11.

The high altar, also known as the Jerusalem Altar, is made from stones mined at Solomon's Quarry near Jerusalem where the stones for Solomon's Temple were also quarried. In the floor in front of that altar are 10 stones from the Chapel of Moses on Mount Sinai, representing the Ten Commandments. The limestone Majestus sculpture of Christ is surrounded by 110 carved figures of saints and angels.

National Cathedral and Nearby Sights on Map

Most famous for its role in 1944, when world leaders convened here to draw up the United Nations charter

Made famous by the movie, the 'Exorcist Steps' run between Prospect and M St just west of where the Key Bridge deposits people into D

A stately mansion built in 1815 by the son of the first mayor of Georgetown, and the step-granddaughter of one George Washington

A hidden gem of magnificent proportions, for only those in the know