A hidden gem of magnificent proportions, for only those in the know. 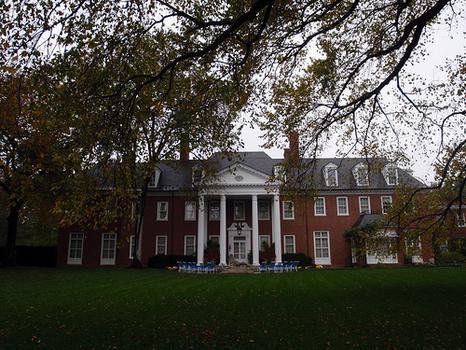 A hidden gem of magnificent proportions, for only those in the know. Merriweather Post Hillwood, prominent businesswoman and heiress to the Post Cereal fortune, fashioned her estate next to Rock Creek Park to be an extraordinarily stately and luxurious site for entertaining guests, housing her impressive art collections, and with the intention of leaving it behind for the world to enjoy. The mansion is a treasure trove of French and Russian decorative arts, much of which she obtained from the USSR, whose government under Stalin was then auctioning off a good portion of its cultural heritage to finance its war efforts. Second in grandeur only to the art collection itself are the French and Japanese-style gardens-great places to linger long after the tour.

Hillwood Estate and Nearby Sights on Map

President Woodrow Wilson moved here for a quiet retirement after the disastrous setbacks of his late presidency, and lived here for little over 3 years before he died (he was buried in the National Cathedral)

An extraordinarily elegant small museum that few Washingtonians have heard of, the Textile Museum is fabric heaven

Columbia Height's Latin American Youth Center's colorful house is dedicated to teaching and encouraging art in the community, and they keep a small art gallery showing exhibits of works by local youths

Housed in the beautiful former Embassy of Mexico, the cultural center has a nice collection of Mexican artwork, and puts on frequent classical and other musical performances, as well as film screenings, lectures, and other events

The Anderson House, which is perhaps better described as a castle, was built in 1902-1905, as the home of Larz Anderson and his wife