Meridian Hill Park is a hidden gem if there ever was one. 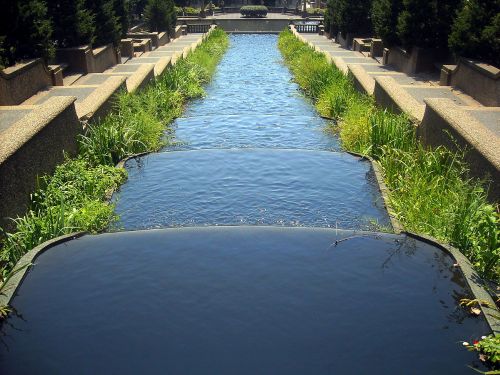 Meridian Hill Park is a hidden gem if there ever was one. Its twelve acres are centered on a long, stunning, cascading waterfall, surrounded by European-style terraced landscaping, and is administered by the National Park Service. The grounds have long been an esteemed commodity in the city, first surrounding an 1819 mansion, which became President James Quincy's home following his presidency. Around the time of the Civil War, Congress considered moving the Presidential residence here from the White House, as the White House was just north of the putrid stench of the mosquito and sewage-infested Washington City Canal, (the plan didn't make it pass the House of Representatives). In the early twentieth century the national government purchased the lands, and converted them into the extravagant Italianate park that you see today. Despite its elegance, the park didn't make it into the modern era unscathed, though. After the 1968 riots, the park was for two decades a haven for open-air drug markets, which got worse and worse throughout the crack epidemic. Following the murder of a teenager in 1990, the community decided to take back control of the park, and organized regular citizen patrols throughout the day and night. They were very successful, and the park is quite safe today. But, alas, the park's rougher days claimed the sword from Joan of Arc-the only female equestrian statue in the city-vandals leaving her arm outstretched without purpose.

Meridian Hill Park and Nearby Sights on Map

Housed in the beautiful former Embassy of Mexico, the cultural center has a nice collection of Mexican artwork, and puts on frequent classical and other musical performances, as well as film screenings, lectures, and other events

House of the Temple

A Masonic Temple, the headquarters of the Scottish Rite, and a prominently featured location in Dan Brown's latest novel, The Lost Symbol

Columbia Height's Latin American Youth Center's colorful house is dedicated to teaching and encouraging art in the community, and they keep a small art gallery showing exhibits of works by local youths

This building is a Shaw landmark, built as the local YMCA in 1912, and designed by one of the nation's first black architects, W

The Mall's only local memorial, and the only memorial to WWI, is this small structure in the form of a Doric-style open-air temple serving as tribute to the 26,000 Washingtonians who served in the Great War

The nation's only monument to African American Civil War soldiers

The National Geographic Museum showcases a variety of changing exhibitions on nature, history, and culture

The Phillips Collection, opened in 1921, is America's first museum of modern art