The heart of Ginza is the intersection of Chuo-dori and Harumi-dori, dominated by the glass cylinder of this building. 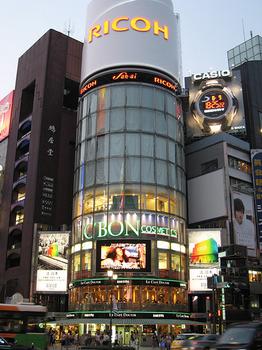 The heart of Ginza is the intersection of Chuo-dori and Harumi-dori, dominated by the glass cylinder of this building. With its huge neon sign, it's been the image of Ginza on postcards and travel books for decades now. The other corners are occupied by Wako and Mitsukoshi, two of the most prestigious department stores (the former being a cut above), and the Nissan Gallery , which shows off new and classic automobiles.

San-ai Building and Nearby Sights on Map