Small but well-implemented commemorative museum for the last stand of the Malay Regiment in World War II's Battle of Bukit Chandu. 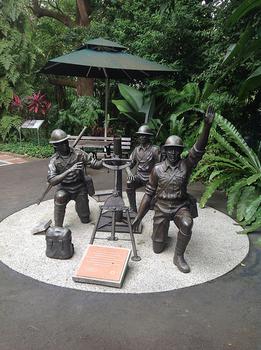 Small but well-implemented commemorative museum for the last stand of the Malay Regiment in World War II's Battle of Bukit Chandu. If visiting here, make a short detour to the free Canopy Walk next door (a part of the Southern Ridges Walk), an elevated footpath through the jungle offering nice views of Singapore's heartlands.

About Reflections at Bukit Chandu

Reflections at Bukit Chandu and Nearby Sights on Map

Formerly the Tiger Balm Gardens, this is the former site of the villa of the Tiger Balm brothers, Aw Boon Haw and Aw Boon Par, now packed with an incredibly bizarre assortment of statues illustrating Chinese legends and moral values

Opened in May 2005, there are two ways of looking at these two restored British-era bunkers: either they're done a pretty good job of making a tunnel interesting, or even if you dress it up with spot lights and recorded booms, it's still just a bunch of tunnels

Formerly the largest British naval base in Fortress Singapore, its guns staring balefully out towards the sea in preparation for enemy attack

Located at the fringes of Chinatown among a row of shophouses, the Baba House is a showcase of Peranakan culture in Singapore and features traditional furnishings typical of Straits Chinese households

See replicas of Asian sailing vessels from the docks at the Historic Ship Harbour, and learn more about Asia’s maritime and cultural heritage through the museum’s education programmes

A sugar-coated, kid-friendly retelling of the official Singapore story, where people of many races have come together to live in harmony

A stretched-out 37-metre version of the statue by the Singapore River, which is lit up at night - note, the Merlion highly disappointingly no longer shoots lasers (if in fact it ever did) from its eyes