Founded in 1939, this club is both a popular destination for pleasure cruises and for competitive regatta racing. 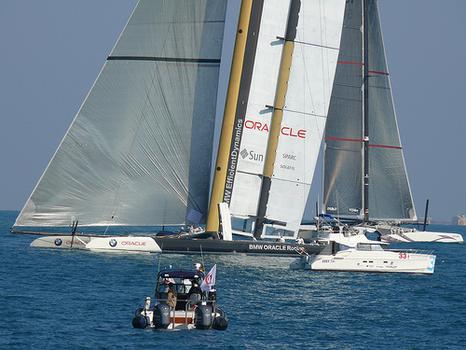 Founded in 1939, this club is both a popular destination for pleasure cruises and for competitive regatta racing. It's plainer than its neighbor the SFYC, however it got a major boost of late when Larry Ellison and the Oracle guys signed up and the club became the challenge club of record for the America's Cup.

Golden Gate Yacht Club and Nearby Sights on Map

Designed by George Gonzales and Peter Richards in 1986, the Wave Organ is a system of PVC pipes that harness the power of the ocean to create music, or at least what can be interpreted as music! There is a unique space at the end of a spit of land where you can sit and enjoy the sounds, and even if it's not your kind of music, there are some excellent views and it's also a great place to relax and have a picnic

Founded in 1927, this club has over 2,400 members and is also popular as both a cruise and regatta venue

The Palace of Fine Arts in San Francisco is one of the few extant structures from the 1915 World's Fair, and one of the most photogenic spots in the city

Housed over two floors, the SFMOMA displays the art ? in a variety of styles and media ? of over 1,000 emerging and established Northern Californian artists

The Long Now foundation was established to foster a better understanding of a 'slower/better' mind set ? as opposed to 'faster/cheaper' one

Hosts photo exhibits and the work of modern Italian artists

Established in 1898 to care for sick and wounded soldiers, it is the Army's oldest named general hospital and during WWII it became the largest Army hospital in the country

The park consists of the Hyde St Pier and the fleet of historic ships moored there, the Maritime Museum, Aquatic Park, and the Municipal Pier

This block contains twelve spectacular mansions in a variety of styles