Now the central building of the National Museum, the Front Palace used to be an enormous complex stretching from the Chao Phraya River across Sanam Luang to Lot Canal. 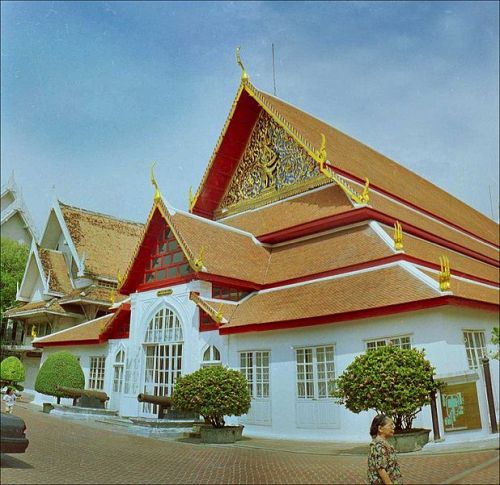 Now the central building of the National Museum, the Front Palace used to be an enormous complex stretching from the Chao Phraya River across Sanam Luang to Lot Canal. It was built in the 18th-century, along with the Grand Palace. The Front Palace housed the heir to the throne, who was appointed by the King; usually a son or brother of the reigning monarch who bare the title 'Second King' or 'Vice-King'. The title of Second King started in the Ayutthaya Period, but gained a significant amount of power during the Rattanakosin Period when the Second King even got its own private army and navy. This large amount of power often led to conflicts between the King and the Second King. The last to bare the title of Second King was Prince Vichaichan. In 1884, he got into a power struggle with King Rama V in an event known as the Front Palace crisis. King Rama V tried to modernise Siam in a rapid pace, and conservative forces and the nobility, including Prince Vichaichan, saw their power and influence being slowly eroded. When Prince Vichaichan got a letter threatening his life, he mobilised up to 600 of his private troops around his palace. The King also mobilised his troops, but this only underlined that the Second King's guards were more numerous and better equipped. After an explosion, a mysterious fire broke out in the Grand Palace, threatening Wat Phra Kaew, and the Second King's troops got on their way to the Grand Palace to try and extinguish it; however this was blocked by the King's Royal Guards who feared that the fire was orchestrated by the Second King to take over the country. Afterwards King Rama V criticised the Second King for not moving all his troops to the Grand Palace, as an ancient custom dictated that the Second King's troops must actively protect the King and the Grand Palace in an emergency. King Rama V ordered his troops to surround the Front Palace, and Prince Vichaichan fleed to the British embassy. After mediation, the powerful Western countries supported King Rama V, who abolished the title and introduced the Western-style 'Crown Prince of Siam' for the heir apparent. Prince Vichaichan died one year later. The palace was turned into the National Museum's main building housing Thai art objects. Some walled remains of the old Front Palace complex can be found inside the Thammasat University complex.

Front Palace and Nearby Sights on Map

This small, green park has a great view of the Chao Phraya River and the modern Rama VIII suspension bridge that crosses it

In the 18th century, following a war with the Burmese, the Thai government gave land in this area to people from the Mon minority who had fought beside the Thai

The Silpa Bhirasri National Museum is a modern art museum dedicated to the Italian professor Corrado Feroci, the father of modern Thai art who earned the epithet 'Silpa Bhirasri'

Built in 1829, Wat Bowonniwet is the shrine-hall of Phra Phutthachinnasi, a very beautiful Buddha image that was created around 1357

In one of the small sois and particularly hard to find, with 200 years this riverbank shrine is actually one of the oldest Chinese shrines in the city

Best viewed from Santichaiprakarn Park, Phra Sumen Fort is one of two remaining towers of the historic city wall that once surrounded Rattanakosin Island completely (the other being Mahakan Fort)