This is an equestrian statue situated at the Wongwian Yai Circle near the railway station of the same name. 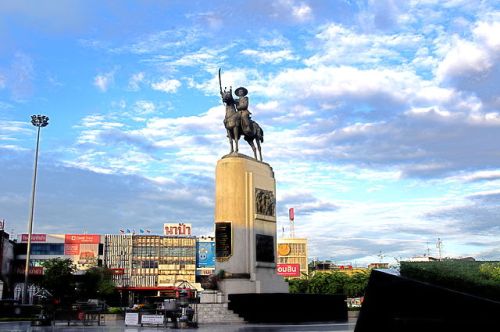 This is an equestrian statue situated at the Wongwian Yai Circle near the railway station of the same name. The king is portrayed with his right hand holding a sword, measuring approximately 9 metres in height from his horse's feet to the spire of his hat. The statue rests on a reinforced concrete pedestal of about 9 by 2 metres with 3.90 metres in height. There are four frames of stucco relief on the two sides of the pedestal. The opening ceremony of this monument was held on April 17, 1954 and a homage-paying fair takes place annually at December 28.

About King Taksin the Great Monument

King Taksin the Great Monument and Nearby Sights on Map

Situated on the mouth of Bangkok Yai canal at the west bank of the Chao Phraya, this massive temple is popular among the Thai-Chinese community

This beautiful park is built near the Wat Anongkharam community where Somdej Phra Srinagarindra Boromarajajonani, HRH the Princess Mother (the mother of King Rama IX) had resided during her childhood

Wat Arun, often called the Temple of Dawn, is located on the other side of the Chao Phraya River in Thonburi, you can find more information in that district article