Formerly the World Trade Center, this enormous complex reopened in 2006 after a massive expansion and renovation, and is now the only mall in Bangkok that can give the Paragon a run for the money in both swank and size. 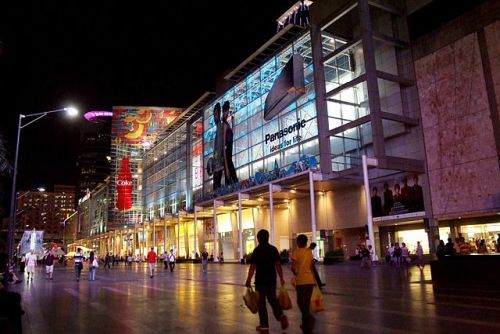 Formerly the World Trade Center, this enormous complex reopened in 2006 after a massive expansion and renovation, and is now the only mall in Bangkok that can give the Paragon a run for the money in both swank and size. It is the third largest mall in the world by leasable floor space, and the second largest building in the world if you include the skyscraper on top of it. It's marketed as a middle-class shopping mall with prices cheaper than Siam Paragon. Most Thais still can't afford it though, so you'll only see the occasional tourist wandering around. Lots of restaurants make this a good destination for lunch or dinner. The top floor has a supermarket and a multiplex. The large Isetan and ZEN department stores are also included in the complex, as well as two book stores and plenty of photo and electronic stores

Central World and Nearby Sights on Map

The Erawan Shrine is a Hindu shrine that houses a statue of Phra Phrom, the Thai representation of the Hindu creation god Brahma

The largest aquarium in Southeast Asia, exhibiting over 30,000 marine animals from all over the world and featuring a wide range of rare and exotic species