The Monastery of Sao Bento (St Benedict) was founded in 1590 as a Benedictine Abbey and is still operational to this day. 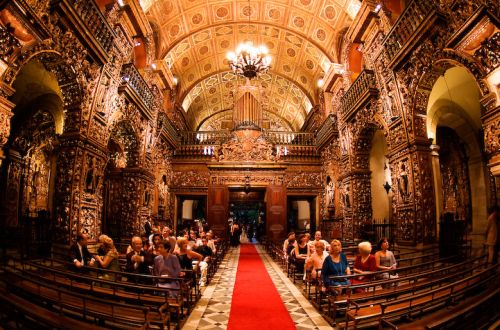 The Monastery of Sao Bento (St Benedict) was founded in 1590 as a Benedictine Abbey and is still operational to this day. The simple façade belies the strikingly grand baroque interiors with gilded details. Highlights are the 18th century crystal chandeliers, tiles painted by Friar Ricardo do Pilar depicting the lives of Benedictine saints, wood carvings by Friar Domingos da Conceição, Alexandre Machado and Simão da Cunha, the Chapel of the Holy Sacrament by Inácio Ferreira Pinto, and paintings by José de Oliveira Rosa. The monastery regularly features performances by orchestras and chamber musical groups, with the Sunday mass having organ music and Gregorian chanting.

Sao Bento Monastery and Nearby Sights on Map

The Casa França-Brasil is a Neoclassical building constructed in 1820, which serves as a French cultural centre with a gallery and video hall

The Banco do Brasil Cultural Centre has a gallery, movie theatre, video room, library and stages, all within a beautiful Art Deco building from 1906

The headquarters of the federal oil company is an interesting piece of Brutalist architecture by Roberto Luís Gandolfi, soaring 108 metres into the sky