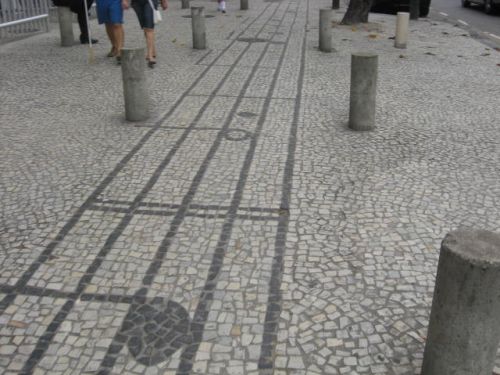 The mosaic sidewalks along Boulevard 28 de Setembro between Praça Maracanã and Praça Barão de Drummond are musical staves. Written in the stones are 20 complete musical works, including tunes by Ary Barroso, Martinho da Vila, Almirante, Noel Rosa, and other famous Brazilian composers who frequented Vila Isabel back in its Bohemian heyday. Also check out the famous sculpture of Noel Rosa on this street at the entrance to the bairro.

About Musical sidewalks of Vila Isabel

Musical sidewalks of Vila Isabel and Nearby Sights on Map

Once the world's highest capacity football venue, it was able to hold nearly 200,000 people

If you won't be making it to the Amazon or the Pantanal, the Rio de Janeiro Zoo is a good place to see some of Brazil's more exotic creatures as well as species from around the world

Museum of the First Reign

Museum of Astronomy and Related Sciences

Also has an observatory

Site of the famous Rio Carnival parades, the Sambadrome Marquês de Sapucaí is a 700 metre long street flanked by grandstands and VIP boxes

The Train Museum has a modest collection of 19th century engines, train cars used by emperors and presidents, and streetcars

Estádio Olímpico João Havelange, known by its nickname of Engenhão, is a soccer stadium that was built for the Pan-American Games of 2007

The small Tram Museum has photos of and artifacts from the glory days when trams were all over Rio, including some models of old tramcars and lots of electrical equipment