Casa das Canoas is the former residence of architect Oscar Niemeyer, built by him in 1951. 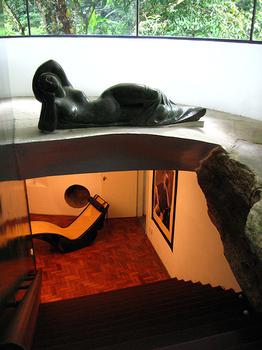 Casa das Canoas is the former residence of architect Oscar Niemeyer, built by him in 1951. The Modern house is minimalist in style and organically blends in with the leafy surroundings. It has an exhibition on the architect's works, while the poolside has a few sculptures. Call in advance before visiting.

Casa das Canoas and Nearby Sights on Map

Named after a French businessman who owned the neighborhood in the 19th century, the Leblon Beach is the haunt of the wealthy, lined with upscale bars and restaurants

Sprawling over 140 hectares at the foot of the Corcovado Mountain, the lush Jardim Botânico contains a huge collection of 6500 species of plants from all over the world, not only tropical ones

Ipanema is one of the most visited beaches in Rio, though the poor water quality makes it unfit for swimming and aquatic activities

Lagoa is a scenic neighbourhood with a lake, and home to Rio's rich and famous citizens

Formerly a presidential palace (1889-1893) and foreign office, the Itamaraty Palace now hosts a museum of South American diplomacy, a library and the UN information offices in Brazil