It was constructed in 1976 for Somdet Phra Yanasangwon, the present Supreme Patriarch, and later was supported by His Majesty the King. 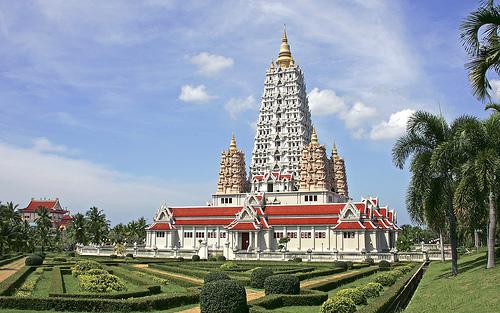 It was constructed in 1976 for Somdet Phra Yanasangwon, the present Supreme Patriarch, and later was supported by His Majesty the King. At the entrance are situated international pavilions presenting each country’s national architectural style around the pond. Within the compound of the temple are the mondop where a replica of the Buddha’s footprint is enshrined, a large chedi containing the relics of the Lord Buddha, as well as, his enlightened followers, and Wihan Phra Yanaret. Moreover, there is a place where the Royal Project for Agricultural Training Centre and Wildlife Preservation Area are located.

Wat Yanasangwararam Woramahawihan and Nearby Sights on Map

The biggest laser-carved Buddha image in the world, it is 109 meter high and 70 meter wide etched on the Chi Chan moutain in 1996 to celebrate the 50th coronation anniversary of His Majesty King Bhumibol Adulyadej

Beautiful gardens with waterfalls, elephant shows, 'Cultural Extravaganza'performances 4 times a day, restaurants and so forth - enough to fill an entire day

Jomtien Beach, more popular among family vacationers, is in the southern part of the urban area, and separated from Pattaya Bay by Buddha hill