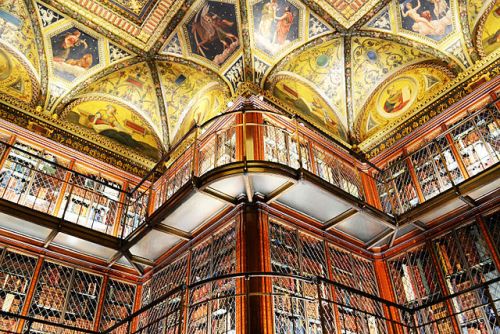 Once J. Pierpont Morgan's private library, this building houses his art collection, a Gutenberg Bible, and a first printing of The Star Spangled Banner. The bookshelves lining the walls include books by Dante, Dickens, Einstein, Twain, and several First and Second Folios.

About The Morgan Library & Museum

The Morgan Library & Museum and Nearby Sights on Map

Walk in and see the main concourse, a cavernous room often filled with people and elegantly detailed, with arched windows, a lovely clock, and an astronomical ceiling

One of the most recognizable and favored structures of New York, the Chrysler was the world's tallest building when completed in 1930, but lost that title to the nearby Empire State Building less than a year later

Located behind the Main Library, this shady park is an excellent spot to relax and get some good views of the surrounding skyscrapers

Since it was built it has been probably the most hated building in New York, mostly because it rises up over Grand Central Station, completely blocking the view up Park Avenue, but it is a good example of modern architecture

The Christmas Tree, the Skating Rink, NBC studios, the shops and hubbub - you can't miss it

Originally the second-tallest building in the world when it opened in 1905, One Times Square was constructed to be the headquarters for The New York Times, a function it would serve for less than ten years

Top of the Rock Observation Deck

A place filled with video screens, LED signs, and flashing lights; a world wonder or a tourist nightmare depending on your perspective, the 'new' Times Square is a family-friendly theme park of themed restaurants, theaters and hotels, as well as a developing business district