Meena Bazar is a popular flea market with antiques (and not-so-antiques). 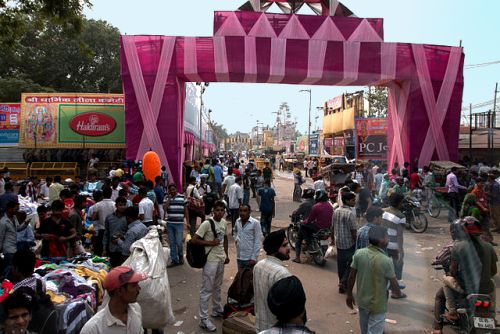 Meena Bazar is a popular flea market with antiques (and not-so-antiques). It is also known as Chor Bazar or "Thieves' Market", so hold onto your wallet and don't believe every claim you hear.

Meena Bazar and Nearby Sights on Map

The Lal Qila or Red Fort is one of Delhi's top tourist attractions and a UNESCO World Heritage Site for its imposing architecture that fuses Persian, Timurid and Hindu styles

The Digambar Jain Lal Mandir is the oldest Jain temple present in Delhi, tracing its origins to 1656

Gurudwara Sis Ganj Sahib is an important and historical Sikh place of worship, built on the spot where their 9th leader, Guru Tegh Bahadur, was beheaded on the orders of the Mughal emperor Aurangzeb

Chandni Chowk is the heart and soul of Old Delhi, the place to go for the full-on Indian experience of crowded, twisting alleys with tiny shops and vibrant windows

The Khooni Darwaza, meaning the Bloody Gate, was once known as the Kabuli Darwaza got its present name after 3 princes of the Mughal dynasty - Mirza Mughal, Mirza Khizr and Mirza Abu Bakht were shot by British Captain William Hodson during the Sepoy Mutiny of 1857

Raj Ghat is the memorial to the Father of the Nation, Mahatma Gandhi, built at the site of his cremation