Delve into the heart of Delhi's culinary tradition at the narrow and winding Paranthe Wali Gali in a corner of Chandni Chowk. 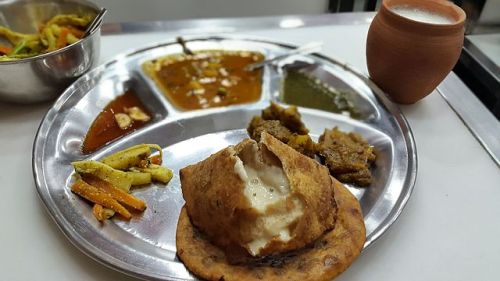 Delve into the heart of Delhi's culinary tradition at the narrow and winding Paranthe Wali Gali in a corner of Chandni Chowk. Only 3 of the original 20 parantha stalls of the late 1960s remain - Pt Kanhaiyalal Durgaprasad Dixit (estd 1875), Pt Dayanand Shivcharan (estd 1882) and Pt Baburam Devidayal Paranthewale (estd 1886). They serve a variety of deep-fried stuffed paranthas with curries, chutneys, and sweet lassi.

Paranthe Wali Gali and Nearby Sights on Map

Karol Bagh in West Delhi has a market known for traditional Indian wear, sarees and shawls

Adventure Island in Rohini is a theme park with fun activities for kids, roller coasters and water park

The Cycle Market deals not just in bicycles, but in cameras as well

The Budha Jayanti Park was built to commemorate the 2500th birth anniversary of the Buddha, with a gilded Buddha statue in a pavilion set on an artificial island